In the latter years, the energy industry experienced a renovation process. This sort of revolution, due to the increasingly tight worldwide environmental regulations, lead to a strong development of renewable energy sources exploitation and at the same time of the technologies for pollutant and climate-changing emissions reduction.

Fuel emulsions are suitable for applications in this framework because they represents an economical solution for the emissions abatement. Emulsion Power S.r.l. and its R&D company Additive Chemicals Limited over time have developed several technologically advanced and reliable solutions for different applications.

The interest towards emulsions as alternative fuel raised recently comes from the capability of the water, already noticed since the beginning of ‘900, of reducing harmful emissions.

Generally, it comes emulsion when two immiscible fluids are mixed together throughout a mechanical process. This mechanical mixing produces a two-phase system in which one phase (dispersed phase) is spred into the other one (continuous phase). The dispersed phase is constituted by the fluid with the lower quantity

yields to a significant reduction of either Nitrogen Oxides (NOx) and Particulate Matter (PM) quantities in the exhaust gas of the combustion system in which it is burned. The water can be injected either as liquid or gaseous phase directly into the combustion chamber, but the presence of the water inside the fuel represents a more efficient solution and it doesn’t require any additional injection system.

Fuel emulsions can be roughly divided into Water-in-Oil (W/O) and Oil-in-Water (O/W), depending both on water content and the production process.

In the first case (W/O) water droplets are the dispersed phase, in the second case (O/W) instead is the fuel.

The emulsion stability is a key factor, especially in those cases in which a storage of the emulsion for long periods of time is required. Emulsions are not stable by nature indeed. In a quiet system, the dispersed phase particles tend to coalesce spontaneously creating increasingly larger droplets. At the end of this process the two fluid will be separated again. For this reason, the stabilization of the emulsion is a fundamental factor.

The stablilization is obtained using particular surfactant compounds (ACL additive series by Emulsion Power) which prevent the separation of the water for a long period (some months).

Emulsion Power have both the technologies to produce W/O and O/W emulsions.

W/O stable emulsions with water content up to 25% by weight can optimize the combustion of the base fuel since every micro water droplet is surrounded by the fuel (the Stable Emulsion by Emulsion Power has a stability longer than 5 months).

Analysis made on the Stable Emulsion produced with Emulsion Power equipment shows that the distribution size of water droplets is unimodal centered in the interval 0,1 – 0,5 µ. 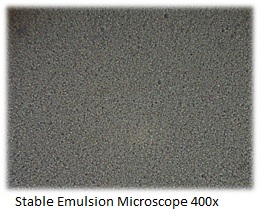 The innovating technology of the machineries and high performance additives (ACL series) used with the Stable Box of Emulsion Power, allow to produce emulsions which are stable over time, accordingly to the laws and standards of each country, using Diesel or other fuels like HFO.

Emulsion Power owns the technology to produce oil-in-water emulsions as well, which can be used for instance in the case of HFO fuels, to avoid the common blending with Diesel.

The Emulsion Power way to emulsions

With the final goal of producing performing emulsions, independently by the technology used (W/O, O/W, stable or on-demand emulsions), Emulsion Power offers its complete expertise:

If the additives and the mixers are the core, and the trade secret, of the Emulsion Power technology, the plant design and control solutions constitute the real additional contribution provided by Emulsion Power to assure a high quality emulsion.

Emulsion Power owns additives and mixers at state of the art, nevertheless this is not sufficient to reach the quality standards that we offer. The software control and the plant design solutions make the difference because they determinate significantly the timings and the ways in which the emulsification process occurs: so they assure that the shear stress provided by the dinamic mixer developed by Emulsion Power is able to initially warp the water droplet, till giving it an elongated oval shape.

The final result is a perfect emulsion without free water. Its stability largely overtakes the law requirements.

This is an overview of the Emulsion Power solutions related to the emulsion type produced: 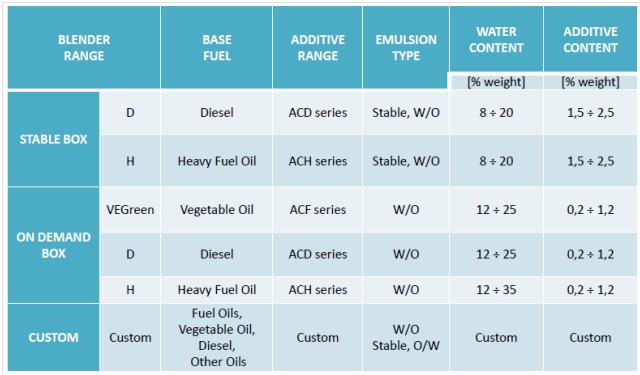 The EMULSION POWER emulsions can be considered a green fuel. They improve the combustion efficiency and 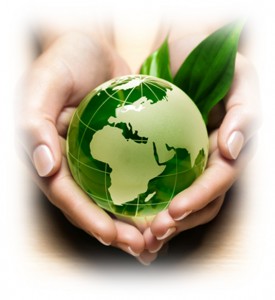 decrease the most important pollutant emissions.

The use of emulsion yields indeed to a significant abatement of the most harmful and pollutant emissions, while, at same time, the fuel consumption and the power output are almost unchanged.

The emissions abatement can vary significantly depending of the application, the base fuel and the emulsion’s water content. For the case of Stable Emulsion, from the several tests carried out by Emulsion Power, the averaged percent emissions abatement which can be obtained using emulsions are summarized by the following figure, assuming a 100% for the values associated to the same fuel used to produce the emulsion: 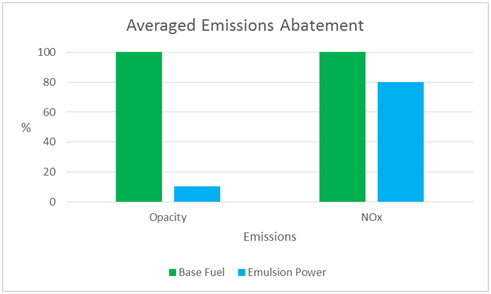 With regard to Diesel engines, Emulsion Power tested the Stable Emulsion in several applications and conditions, always finding a certain fuel saving (the base fuel used to produce emulsion) and a generalized emissions abatement.

The following figure shows the results obtained during the test at the bench on an IVECO engine mod. N40 ENT M25, carried out at the plant of CMD S.p.A. (leader in design and development of diesel engines: www.cmdengine.com), without any tail-end emission abatement system (no catalytic converter or any kind of filter at discharge) and at maximum power conditions. 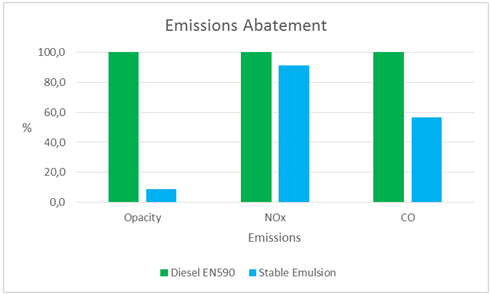 This test found also that specific Diesel consumption (means at same power output) decreased of around 2% at maximum load condition, between the points of maximum torque and maximum power, that corresponds to the most important speed range of the engine for automotive applications.

Other tests has been carried out directly on vehicles, provided with emissions abatement systems, measuring the opacity of the exhaust gases. The figure below, shows the drastic collapse of the opacity value, recorded on two different vehicles. This data proves that, independently by the European emission Standard which characterizes the engine, the use of Stable Emulsion allows the particulate emissions to be drastically reduced. 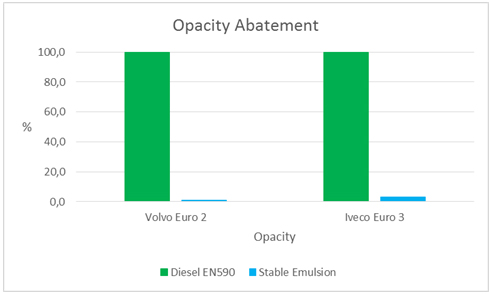 Another test at the bench on a mono-cylinder engine with Stable Emulsion, confirms the capability of this product to abate pollutant emissions. Moreover it shows that the use of Stable Emulsion yields to a generalized increase of the engine efficiency (about 2.5% on average). Higher efficiency means lower fuel consumption, quantity that is inversely proportional to the former one.

Besides it is important to point out that another resulting effect is the abatement of Carbon Dioxide (CO2) emissions, that is a compound which is the object of very special attention since it is recognized, even if not a pollutant, to be a climate-changing gas. The two figures below show the relationship existing between higher efficiency and CO2 emissions abatement, at the 11 measurement points collected. 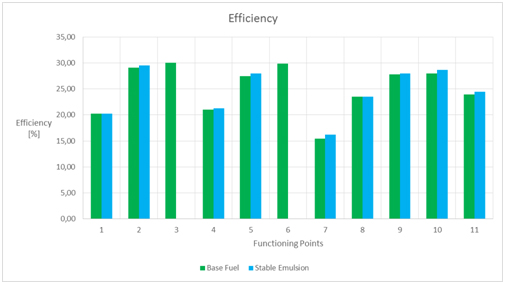 Emulsion Power carried out other tests on both stable and on-demand emulsions made with other base fuels than Diesel, always yielding to PM and NOx emissions abatement ad to specific base fuel consumption as well. 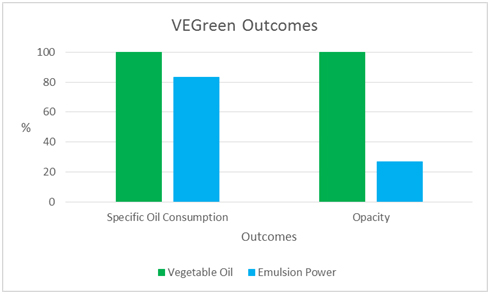 yields to a significant economic saving, due to lower fuel consumption (higher engine efficiency). As expected, the measurements showed a drastic abatement of the exhaust gases opacity.

In the combustion process of a Diesel engine, two phases can be distinguished: the premixed phase, after the ignition delay period, is characterized by a very fast heat release rate; the diffusion phase, which follows the first one, is characterized by a slower heat release rate, controlled by the mixing of vaporized fuel with the air. Thus, the diffusion phase dominates the combustion process. It takes place at stoichiometric conditions, which yields to higher temperatures.
Within the jet region, where the Diesel/air ratio is higher, the soot formation occurs. Mostly it is oxidized during the successive combustion, the remaining part is discharged with the exhaust gases. In the flame region instead, where higher temperature peaks are reached, the formation on Nitrogen Oxides (NOx) due to the thermal mechanism (thermal NOx) occurs. These compounds cannot be reduced before they leave the combustion chamber, so they are mostly released to atmosphere with the exhaust gases.
CO and HC formation occurs during the combustion process since they are intermediate products of the successive reactions which lead to the complete oxidation of the fuel injected in the cylinder. Their oxidation depends on their residence time, the oxidizer amount and the temperature within the combustion chamber. CO is also the precursor of the soot formation process. HC formation is more complex, because it can be formed also in the final instants of the combustion process in correspondence to the cylinder wall.

The presence of the water droplets in the emulsion has a significant impact on the soot formation (PM emissions). There are several ways in which it acts (mechanical and chemical mechanisms). Firstly, the water droplets in the fuel jet increase its penetration, because of the higher momentum associated to them. Secondly, during the vaporization process, the water contributes significantly to the fuel spreading and atomization in the combustion chamber, since its vaporization is faster (droplets microexplosions) in respect with Diesel. Finally, the higher latent heat and thermal capacity of the water determinates an increase of the Diesel vaporization time, which in turn increases the ignition delay period.
All these mechanism contributes to enhance the Diesel-air mixing.
As final result, a lower Diesel/air ratio within the jet core occurs, which yields to a significant abatement of the soot formation.
For the same reasons the premixed combustion phase, characterized by lower temperatures, is longer. Besides, the increased heat absorption by water droplets causes a generalized decrease of temperature peaks during the combustion process.
Thus, the thermal NOx production rate decreases yielding a significant abatement of their emissions.
Several studies showed that the PM and NOx emission reduction is directly proportional to the amount of water in the emulsion.
On the other hand, lower temperatures usually would yield to an increase of CO and HC emissions. For these compounds, emissions vary from case to case, depending on applications and operating conditions.
Mostly, the use of emulsions can yield to CO concentrations abatement, where the part associated to the soot formation mechanism is not formed for the reasons explained above. However, the resulting amount depends on the balance between this and the lower temperatures effect. In those conditions in which the lower temperatures are more significant, using the emulsion could produce a small increase of CO emissions as well.
Since HC formation is due to several mechanism, the impact on their production due to the use of emulsion is even more variable depending on the operating conditions. By one side, the improved Diesel/air mixing due to the water presence as described above, can contribute to decrease their amount during the premixed combustion phase. On the other hand, the lower temperatures usually increases their formation in those regions of the chamber where the diesel concentration is not high enough to reach ignition condition.
Furthermore their production is also significantly influenced by the size and geometry of the combustion chamber and by the jet orientation, since many HC are produced when the fuel hit the chamber wall. Here the vaporization is slower and the successive oxidation would take place when the oxidizer concentration is lower, yielding to partially oxidized compounds formation. Using emulsions, the lower temperature can amplify this mechanism, leading to an increase of HC production.

The mission of EMULSION POWER S.r.l. it's to optimize energetic efficiency in the name of the economy (rationalization) while respecting the environment, in perfect harmony with the existing and future directives .